Back to Give Page
Liga GK Promotes Developmental Futsal

Gawad Kalinga (GK) strives to end poverty and believes that sports are one of the forefronts of social change in its 3,000 communities across the Philippines. GK SipaG is a special program under Child and Youth Development platform of GK that seeks to develop the youth through sports, particularly football/soccer and Futsal.

Since 2005, we have developed social football programs in GK communities such as in Mandaluyong, Quezon City, Pasig City, Taguig City, Muntinlupa, Palo Leyte, Sagay Negros Occidental, Makilala in North Cotabato, Maguindanao and Marawi . The program means to use football to add structure, values, and discipline to the lives of underprivileged youth as early as 6 years old until they reach 21 years old. GK SipaG desires to develop youth leaders through sports. In 2020 it aims to mentor 5,000 children, develop 300 youth leaders in 30 areas nationwide.

One of the concrete program we have that needs funding is the annual Liga GK. Liga GK has been running since 2008 and in this year it will take place from September 29, 2018 to December 9, 2018 every Sunday with 12 participating teams. The format of the competition will be a centralized 8-game round-robin between teams followed by a playoff elimination round to determine both Cup and Plate Champions. It seeks to promote youth leadership, values formation, civic responsibility and camaraderie between various participating communities in Metro Manila through Futsal.

We also put up an academy in Metro Manila, at most 50 kids from 7 years old to 12 years old to train twice a week in one particular location throughout the year.

A major chunk of our expenses is the logistical cost, such as transportation for participating kids. Join our league of heroes as we build a brighter future to our young athletes. 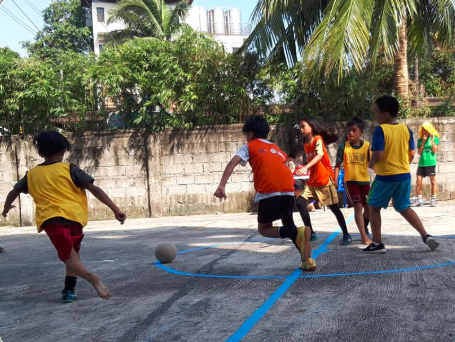 Liga GK aims to promote a developmental futsal to young kids ages 11 under. In SipaG one of our main goal is youth empowerment - developing 300 youth leaders to mentor and serve more than 3,000 children playing street football in their communities and provide these leaders opportunities through livelihood and further education in the future.